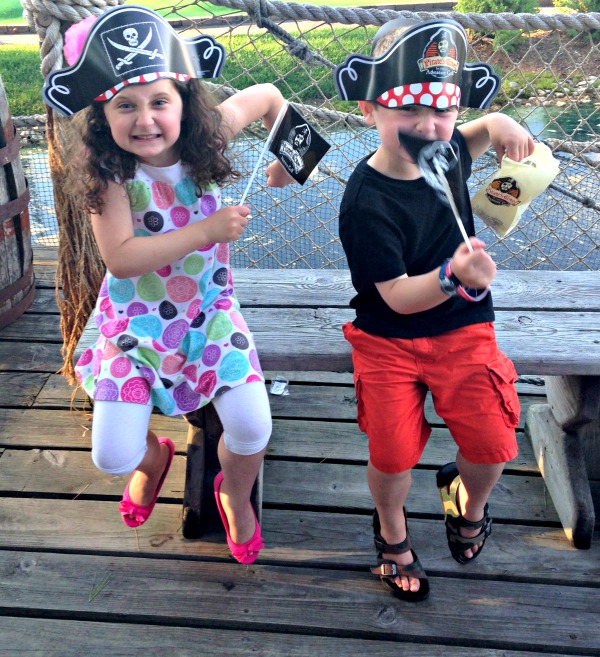 
My two little pirates up above are 17 months apart, which often makes people ask if this was intentional or not. The answer is,  it was…and wasn’t. Our first took me about six months to get pregnant with, so I assumed it would take the same amount of time to get pregnant the second time. (Best laid plans, right?) I wanted to start early because I knew I wanted kids fairly close together, and then got pregnant right away. Ha! I’ve only ever had these kids at this age distance apart, so I don’t really know what it would be like to have it any other way. Right now, at this age and time, with the diapers and such behind me? I love it!
Here are the top 5 reasons why I LOVE having kids close in age:
1) My two kids are the same distance apart in age as my brother and I are, and he is one of my best friends. Being in the military and all the moving we do, I love that my kids have a built in friend in each other. They play together really well (for the most part!), and have a lot of the same interests. They will also be able to be in the same schools as we move, guaranteeing a person to sit next to on the bus, or in the cafeteria. They will always have each other, and I work really hard to make sure they are friends, and always have each others’ backs.
2) Before kids, my husband and I knew we wanted two-ish kids, pretty close together, and that I would stay at home until our youngest went to school. If there had been a huge age gap in there I would have to stay home longer than if we just had them close. Luckily the timetable worked out well (a little TOO well… ha.) Even with holding my son back a year for Kindergarten, I’ve been home 7 years, and I couldn’t have asked for a better reality for my kids and I.
Another thing I liked was that I was pregnant for about two years in a row, with 8 months in between my first and second pregnancy. It’s hard as a woman to let everything go and surrender to gaining weight and nursing and all that comes with little babies. I like that I did it all at once, so then I could get back to a place where I felt comfortable in my body, and raise my babes at the same time. I’m one of those, “Let’s do it all now at once so I can get it all back'” kinda girls, so having kids back to back was ideal for me.
3) My daughter was 17 months old when we brought my son home, and there was zero sibling rivalry with her and him. She was, in essence, still a baby when he came home, so she didn’t even have the mindset to care that there was another baby at home. This has been true the entire time, too. She has no memory of NOT having a sibling, so it has never occurred to her to care about sharing her parents. She DOES sort of think he is hers, though, and bosses him around like she is his mama!
4) I often have people ask me if my children are twins (they are the same size, essentially), and I often feel like they are. Once they got past the baby stages, they evened up in height and weight and began to like the same things. I used to have to buy toys and other things in the same colors (or they would fight over them), and still buy them the same items for holidays. They wear the same size clothes and enjoy the same activities, and I find this really easy. In my mind, they come in a pair, and I love that.
5) Having kids close together means you don’t really have the chance to see the light at the end of the tunnel (typically four years old and up, where they use the bathroom and dress themselves!), so you don’t miss anything by having another baby. When my son was born we were still in the thick of it. I was already changing one kid’s diapers, so what was one more? I had the strollers and toys and baby gates all up, and didn’t have to change much. I can see how hard this would have been now as my kids are far more independent and able to do a lot without me. If I had a baby now my life would change drastically. I love that I got to this place at about the same time, give or take a year, and didn’t have to go back to diapers and bottles after leaving them behind.

Tell me, are you close in age to your siblings? How has this been good (or bad?)